I have read your open letter to Apple where you give your reasons for refusing to allow your album ‘1989′ to be included on their forthcoming Apple Music streaming service.

I applaud it. It’s great to have someone with a huge following standing up for the rights of creative people and making a stand against the corporate behemoths who have so much power they can make or break someone’s career.

For instance, you say:

I’m sure you are aware that Apple Music will be offering a free 3 month trial to anyone who signs up for the service. I’m not sure you know that Apple Music will not be paying writers, producers, or artists for those three months. I find it to be shocking, disappointing, and completely unlike this historically progressive and generous company

It is shocking, like you say, that any company should expect to exploit artists.  It’s not on at all.

This is not about me. Thankfully I am on my fifth album and can support myself, my band, crew, and entire management team by playing live shows

Ah..  but this is the thing Taylor, you say it’s not about you – but clearly it is.  Why else would you make such a public statement about how you’re standing up for the rights of new artists and bands?  Are you really supportive of other artists?

These are not the complaints of a spoiled, petulant child. These are the echoed sentiments of every artist, writer and producer in my social circles who are afraid to speak up publicly because we admire and respect Apple so much. We simply do not respect this particular call.

And this is the echoed sentiment of every professional photographer.  Some are afraid to speak up for fear of being blacklisted by management and PR companies who seek to control the public perception of their talent..  For every artist that is in a secure enough financial and influential position to stand up against the likes of Apple without having to worry that Apple will publicly block your ability to earn a living from their iTunes market place, there are hundreds of professional concert photographers who don’t enjoy that security..  they don’t have the voice you do, and they don’t have the public favour that you have when it comes to demanding fair rights for their work, and they have a much higher risk of being prevented from working in future, not just at your shows, but any show which is connected by the same promoter, venue, PR, or management company.

Which brings me to the point of this open response to you.  I admire your message, I really do.  I just think it loses the gravitas it rightly deserves, because of this: 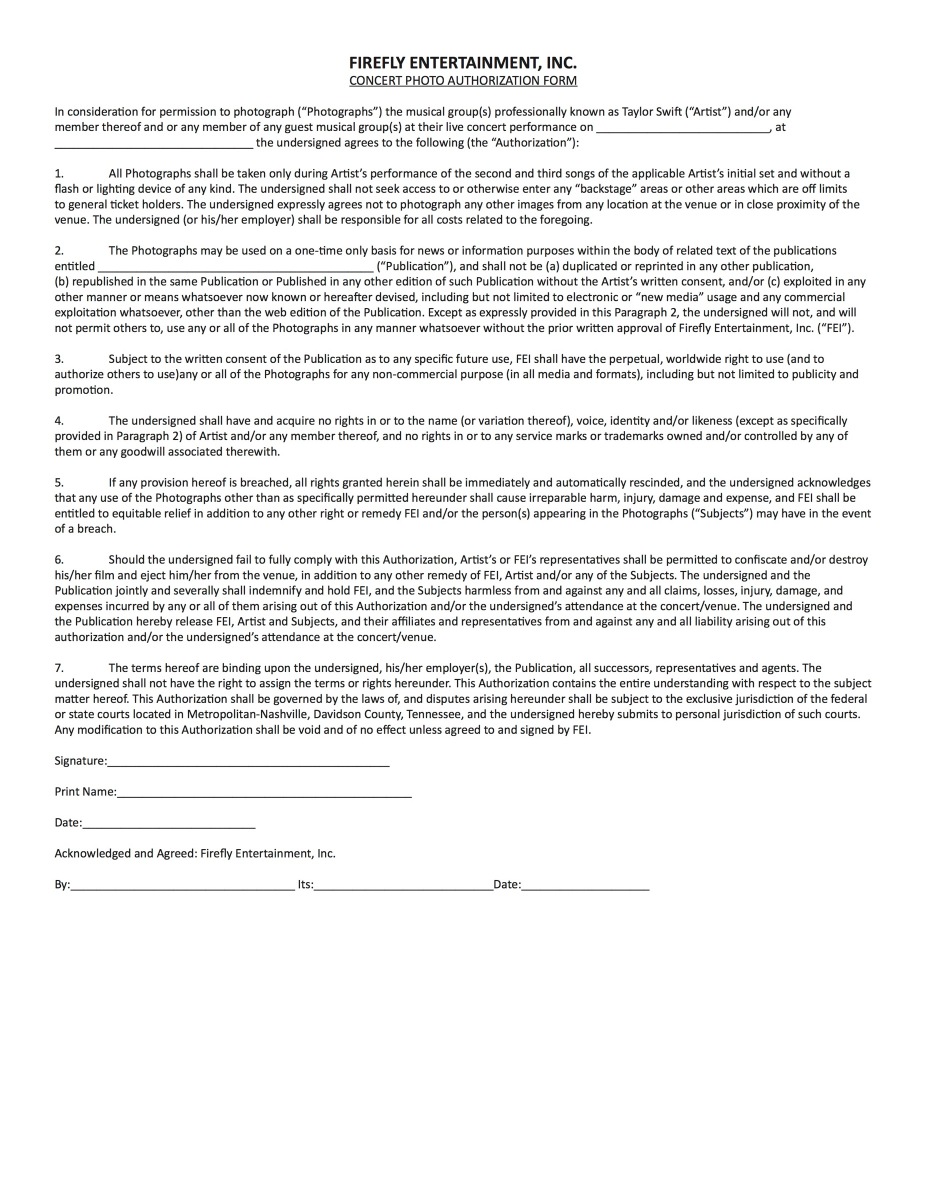 Now..  forgive me if I’m wrong, but if you take points 2 and 3 in that contract (which is provided to Photographers who need to agree to those terms before they are allowed to do their job in photographing you for editorial outlets), it appears to be a complete rights grab, and demands that you are granted free and unlimited use of our work, worldwide, in perpetuity.  You say in your letter to Apple that “Three months is a long time to go unpaid”.  But you seem happy to restrict us to being paid once, and never being able to earn from our work ever again, while granting you the rights to exploit our work for your benefit for all eternity….

How are you any different to Apple?  If you don’t like being exploited, that’s great..  make a huge statement about it, and you’ll have my support.  But how about making sure you’re not guilty of the very same tactic before you have a pop at someone else?

Photographers need to earn a living as well. Like Apple, you can afford to pay for photographs so please stop forcing us to hand them over to you while you prevent us from publishing them more than once, ever.

But I say to Apple with all due respect, it’s not too late to change this policy and change the minds of those in the music industry who will be deeply and gravely affected by this. We don’t ask you for free iPhones. Please don’t ask us to provide you with our music for no compensation

With all due respect to you too Taylor, you can do the right thing and change your photo policy.  Photographers don’t ask for your music for free.  Please don’t ask us to provide you with your marketing material for free.

Time to stop being ‘Mean’.